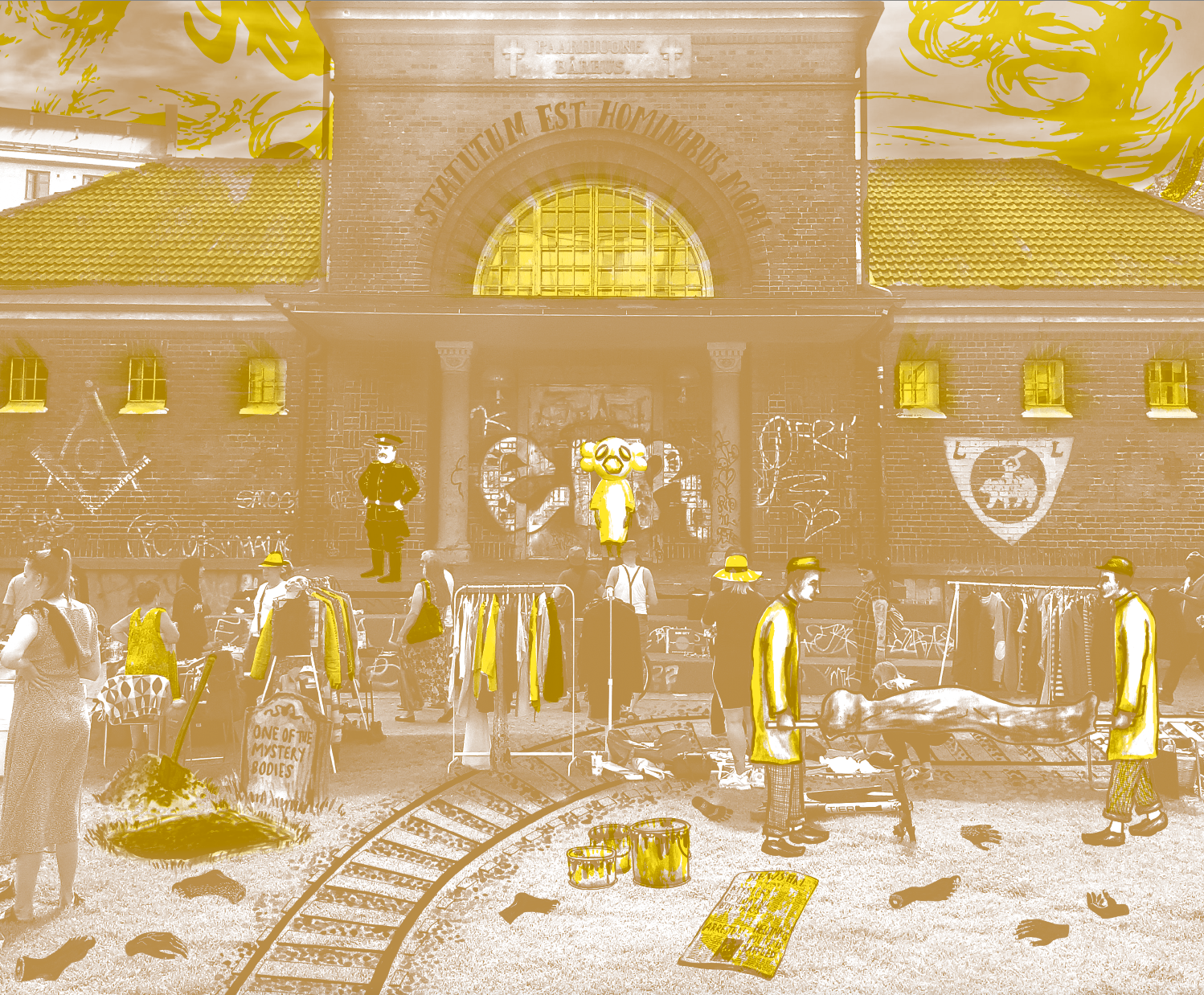 Lively chatter. Sounds of haggling and bargaining. Smells from fried samosas and other greasy snacks being prepared on the spot. The relaxed and buzzing atmosphere you’ve stepped into is the outdoor flea market in Dallapé Park, organised every Sunday in summer time. You can just show up, with whatever you have to sell, and spend the day meeting new people, make a little bit of money, and maybe make home some great finds yourself.

Dallapé Park is a strip of green space in Harju, an area sandwiched between Vallila and Kallio, both vibrant hipster districts in Helsinki. In the middle of the park, as a landmark, stands an old red brick structure. At first glance it seems like an old railway building: the loading platform and the tall middle section make it seemingly suitable for a train station. It is not until you notice the crosses on either side of the main entrance, and the latin phrase over the loading platform: ‘Statum Est Hominibus Mori’ – Man is Destined to Die – that you start to wonder about the original purpose. Known commonly as Harju Stretcher Room (Fin. Harjun Paarihuone), the building was built in 1923 as a morgue where the deceased were washed and prepared for burial before transportation 10 kilometres north, along a purpose built train track, to Malmi Cemetery. Essentially the building wasn’t too far from a train station – it was just one for the dead.

The morgue functioned until the mid 1950s, after which the building was used to store paint for a couple of decades. In 1978 the old morgue fell out of use and was left to deteriorate. Empty and unused, it was settled by the homeless and occasionally used as a meeting space for a youth group, which, in 1986, opened a youth centre in the premises, with the permission of Helsinki City’s Youth Board. The historical building had structural problems which finally caused the youth centre to move elsewhere and has left the old morgue empty since January 2020.

After reading more about Harju Morgue, I was reminded of a phrase that was coined by my great-aunt and is still used in my family:

But what was the Harju Morgue case? I only knew that the phrase was used as a sarcastic comment to any common mishap, but I had no idea if it even referred to a real event.

Harju Morgue had an interesting history, even in its earliest years as a functioning morgue. In the 1930s it became a major source of speculation in a mystery involving a number of dismembered bodies which were found in a fresh water spring near Malmi Cemetery, which, at the time, was still linked to the morgue via rail road.

In August 1930 a citizen found a severed head floating in the spring. The coroner stated that the head had been decapitated post-mortem, however this didn’t yet exclude murder. The incident ignited a vast rumour and gossip wave in Helsinki, with morgue staff, medical students, travellers and politicians all accused. The local police couldn’t get far with the investigation and their efforts ridiculed in the press. Citizens lost trust in them. A year passed, and news reports dried up, along with the police’s capability of solving the mystery of the severed head.

The following year, in September 1931, some unfortunate passers by the same spring, found more severed body parts floating in the water: one head, eight hands cut from the wrist,  nine feet (including six right feet) and an unspecified number of fingers tied together in a bundle. Again the coroner found that the dismembering had happened post-mortem, which suggested that the same person (or people) were behind the crime this time around. Local people started taking part in solving the crime, assisting the police and eventually helping to find out that the bodies had been exhumed from Malmi Cemetery.

Rumours started breaking out again and newspapers were more than happy to publish the unfounded but entertaining whispers. Reports claimed that local medical students had something to do with the recovered body parts, amid suggestions that Helsinki University had a shortage of cadavers to practice on. At one point, adverts even appeared in local newspapers warning landlords against subletting apartments to medical students. Another popular and fateful rumour concerned the caretaker of Harju Morgue. The corpses dug from the cemetery were believed to have come from the morgue, and gossip blaming the caretaker was too delicious. In October 1931 the caretaker was arrested under suspicion of dismembering the corpses. After a month, he was declared innocent, released and all charges dropped, but his reputation was ruined and family in pieces.

Early the next year, in 1932, and still no closer to the solution, things went political. A right-wing lieutenant colonel working at council level tried to discredit his political opponents. He accused the Minister of the Interior and the Governor of Uusimaa Province, alleging that they had been withholding information about the mystery to try to protect their Freemason brothers. The lieutenant colonel hoped to replace these two men with more right-wing politicians in order to forward his anti-communist and far right political agenda. Again the unfounded claims were nowhere near the truth, and the political squabbles were swept under the carpet, as neither the national right wing movement nor the Freemasons wanted to be scrutinised further.

In August 1932 the mystery was suddenly resolved – and not thanks to the efforts of the police. Three women and three men surrendered themselves, admitting they had dug up the bodies and cut off their limbs. The perpetrators even told the police why: one of the women had seen a vision in which spirits told her to perform rituals – to sacrifice body parts in a spring – in order to reveal a treasure.

So it was these events led my great-aunt to coin the phrase to express any frustratingly anticlimactic result: ’Well that resolved like the Harju Morgue case!’. As the mystery is forgotten by many, and with the older generation taking parts of our culture with them as they pass on, I think it is important to cherish these linguistic heirlooms and keep them alive.